Create an Account - Increase your productivity, customize your experience, and engage in information you care about.

The North Fire Station is staffed 24 hours a day by 1 Lieutenant and 2 Firefighter/Emergency Medical Technicians (EMTs) - assigned to Engine 3 and Ambulance 3 (A-3)  to perform fire fighting, rescue, emergency medical response, and inspectional services.

The staffing at the North Fire Station provides for either a fire engine or an ambulance, but not both at the same time.  In the event of a fire or medical emergency in the north part of Town, Engine 3 responds with the Lieutenant and two Firefighters/EMTs to the scene.  The ambulance stationed at the Center Fire Station (A-1) responds as the primary ambulance.  Engine 3's staff provides basic life support to the patient until the ambulance arrives on the scene.

If the primary ambulance (A-1) is transporting a patient to the hospital and a second call is received for an ambulance need, the two Firefighters/EMTs from the South Fire Station responded to the medical emergency with the secondary ambulance (A-3).  Utilizing the secondary ambulance places the fire engine at the North Station out-of-service until the ambulance returns to quarters; however, the lieutenant assigned to the station will respond in a fire department vehicle to provide size-up, command and control, medical aid, and scene preparation for additional units that will be simultaneously dispatched with him/her to the emergency.

Staffed full-time by one Lieutenant and two Firefighters. Capable of pumping 1,500 gallons of water per minute through six pre-connected hand lines and one pre-connected master stream device. A thermal imaging camera is carried on board along with a variety of search and rescue devices and systems to aid in emergency operations. Medically equipped to provide basic life support equivalent to a BLS ambulance. Nasal Naloxone (Narcan) is now carried on the Town's ambulances and fire engines to assist in the treatment of opioid overdoses. ( Photo credit to Bill Seward) 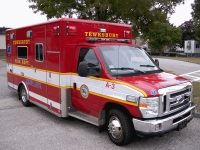 Staffed full-time by two Firefighters with Emergency Medical Technician certification. This emergency BLS ambulance is equipped to handle a variety of medical conditions and injuries. The latest tools and equipment are standard on this vehicle. Our EMTs are trained in the latest skills available to provide the highest level of service possible to the community. Nasal Naloxone (Narcan) is now carried on the Town's ambulances and fire engines to assist in the treatment of opioid overdoses. 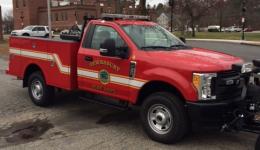 This vehicle is used primarily by the Lieutenant assigned to North Fire Station when the Emergency Medical Technicians are providing services to the community in A-3. This allows the Lieutenant to respond where assistance is needed within the community. The vehicle is equipped with medical equipment and light rescue tools. It is capable of towing the Department's inflatable boat and providing plowing services for the apparatus during snow emergencies.